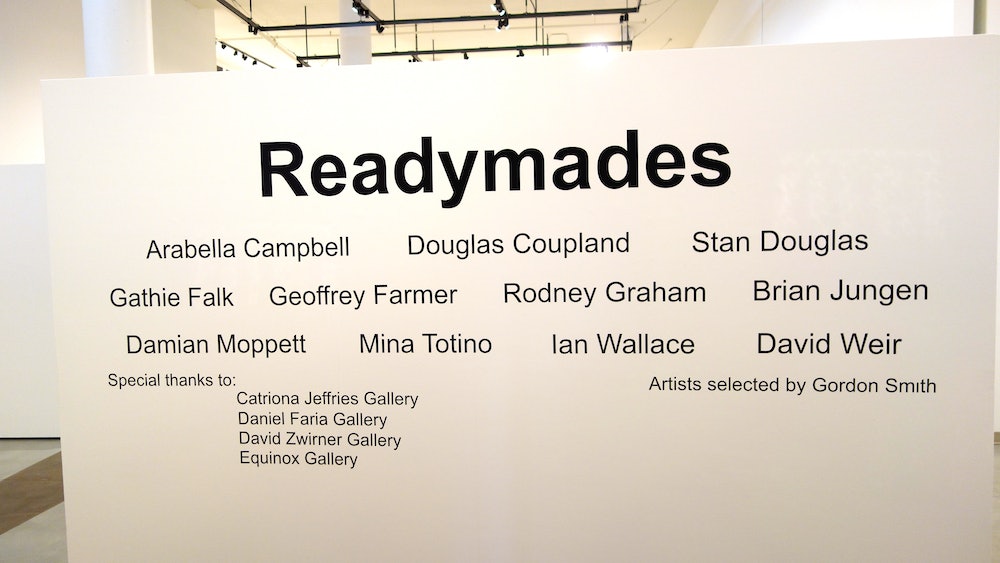 The artists in Readymades were selected by Gordon Smith, and are all from British Columbia. Each had worked in the past with one or more of the possible types of readymade. The artists in the exhibition are: Arabella Campbell, Douglas Coupland, Stan Douglas, Gathie Falk, Geoffrey Farmer, Rodney Graham, Brian Jungen, Damian Moppett, Mina Totino, Ian Wallace and David Weir.

The idea of this exhibition is similar to Thomas Girst and Francis M. Naumann's 2003 exhibition ‘Aftershock' curated for the Dickinson Roundel Gallery in New York. That exhibition included work by Jim Dine, Jasper Johns, Jeff Koons, Louise Lawler, Sherrie Levine, Robert Morris, Claes Oldenburg, Cindy Sherman, Elaine Sturtevant and Andy Warhol, among others. The idea was to look at recent practice that had been influenced by Duchamp’s work with the idea of the readymade, whether consciously or not.

The concept with the Smith Gallery’s exhibition is the same; a survey of British Columbia art that relates to, elaborates on and expands the boundaries and possibilities of 'the readymade’. The two exhibitions, however, could not be more different.